Get new updates sent to your inbox.

I remember like it was yesterday. My two dogs and I boarded an Uber on June 16th, 2016. We went from New Jersey to Washington, D.C. to embark on a journey to bring my innovation ecosystem from Princeton to the nation’s capital.

The conference above marks the milestone of transitioning from phase three to phase four of the social enterprise ecosystem methodology outlined below.

In the words of Princeton community member, Gery Juleff, “Mr. D’Alonzo was inspired by a local luminary (Albert Einstein) who once said, “The world is a dangerous place, not because of those who do evil, but because of those who look on and do nothing.” Daniel decided that it was time to take action in his own community…Daniel realized that we face today a combination of challenges that is unprecedented, including climate change, growing inequality and a world that is defined by change, not repetition. The old “jobs for life” structure is gone. The younger generation will move from job to job and will often create their own jobs – enabled by new technology.”

If you’re unsure what I am referring to, here are a few links to get caught up: a press release about the holistic social enterprise mindset I worked diligently to spread, written by a community member, a write-up from Mercer County news source, MercerMe, and here’s a write-up from Philadelphia-based social impact news source, Generocity.

I had zero expectations. I was well aware that making this move would be the start of a process, and it wasn’t a guarantee that anything magical would happen. It was the next chapter. The continuation of my lifelong journey to leave this place in better condition than how I found it. First, I would need to find the others.

I went online and found a Meetup group called “D.C. Social Entrepreneurs & Change Makers”. The group had a few hundred members, but not many of them were turning out for the events. Within a few weeks, I received notice from Meetup that the group’s leader stepped down. I saw it as an opportunity to take a leadership role while working within the existing infrastructure built by others. Now that I had administrator access to the group, I refreshed the brand, gave it a new name, designed a simple logo, and updated the description.

As you can see, I slightly modified the Princeton Impact Project logo.

I hoped this would signal to the existing members that I took it seriously. I wanted them to know I would design a nice experience for them. In July, within a few weeks of my arrival, I hosted my first event.

I wasn’t sure, exactly, how things would evolve, if at all. I knew the general direction I wanted to walk, and that was enough to start. I was hesitant to host the event on a Saturday. It seemed like everyone in D.C. worked a lot, and they took their jobs seriously. I couldn’t imagine people showing up during the week. Would the weekend be any different? There was only one way to find out.

Happy hour hosted by one of DC’s emerging social enterprises who recently received Acumen’s first US-based impact investment. Mingle with the founding team and get to know your fellow socents from the area.Description: This meetup is a convening space for you to establish relationships with other community members who are passionate about using bu…

I learned a few important lessons from hosting this event. To start, there were a lot of individuals in D.C. working on various impact projects. I learned these people cared enough about their work that they were willing to show up for a stranger (me) on a Saturday afternoon. Their attendance taught me that “impact” and “change” was not a luxury, rather, it was how they identified themselves. 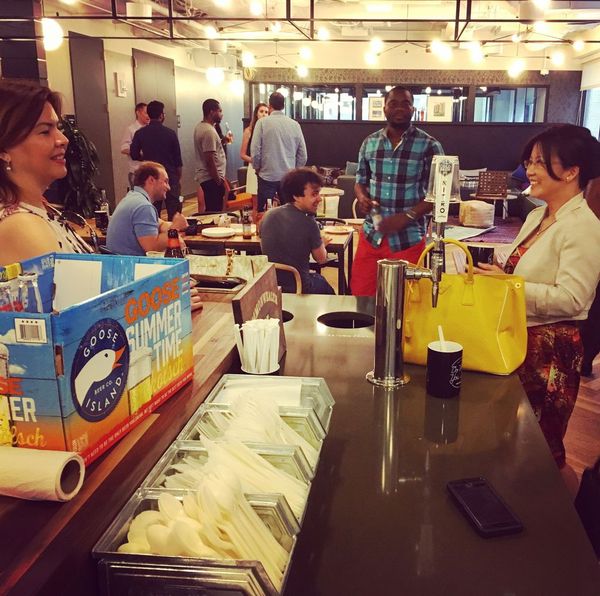 Perhaps the most important insight I gained from this event was that these change-agents were looking for human connection. I assumed that if they had already known of a place to count on to acquire this connection then they wouldn’t have shown up.

I planned my next steps based on this assumption.

I invested the next six months immersing myself in the local community to (1) sew myself into the cultural fabric, and (2) invest adequate time doing the ethnographic research necessary to influence social change.

I wanted it to be clear that I was in D.C. not for fame and fortune, but to serve the people. I was willing to play the long-game to figure out how to best serve their unique needs. I built relationships across the sectors.

I scheduled 100+ coffee meetings. I did a lot of listening. I attended events, participated in the activities of others, and observed. I leveraged this time to build social capital, identify people who shared my values, and begin to formulate a plan.

This was a good sign. I kept my head down, and continued to sew myself into the cultural fabric of the local community until I felt confident to emerge with my next event.

As I did in Princeton, I looked to the public library as the place to establish a centralized convening space.

New Meetup Series!Saturdays 4pm come hang out with people like you – start a side project so you can escape from that job you know you won’t stay at for much longer – you deserve to be in an environment where you thrive and we want to help you create that for yourselfCan’t wait to see all of you who came to the meetup I hosted in July! I’ll see y…

I hosted the second Side Project Saturday one week later. Consistency is important.

New Meetup Series! Saturdays 1pm come hang out with people like you – start a side project so you can escape from that job you know you won’t stay at for much longer – you deserve to be in an environment where you thrive and we want to help you create that for yourself.Bye for now!!! Daniel

The library was good for us to start with, but D.C. had a different vibe than Princeton. There already were many coworking spaces, hubs, and people were working together in new ways. It was validating to have people express interest in the first two meetups and show up in-person. However, moving forward, I was hoping to establish a more modern and hip spot.

WeWork is hands-down the place I wanted to cultivate this community. It’s where these types of things belong. I wasn’t as much of a fan of the K Street location, but I did enjoy the WeWork Chinatown spot. I made friends with the WeWork teams who ran both locations just to keep my options open. FYI when you’re ready to host an event you should approach WeWork – they do a nice job of making it easy. No gatekeeper complex at all. Community is WeWork’s thang.

I would prepare to host the next event with my new friends over at WeWork Chinatown, but at the same time I was working in the background with GA to get logistics squared away.

One of my objectives for this next event at WeWork was to evoke a deep emotional response from the participants. I wanted the people to feel something powerful enough that they couldn’t help but open their mouth to talk about it. I wanted them to feel connected to one another. As I say in my methodology, I would now attempt to create the conditions for the people to reconnect with their humanity. I had an idea on how I would go about doing it.

Several years ago, I learned of an old Chinese Proverb known as the Thin Red Thread while watching a TV series on FOX starring Kiefer Sutherland.

I remember back then thinking to myself how awesome it would be to use this Proverb to inspire my team (which did not exist yet), and mobilize them into action. I imagined what it might feel like to be on a team with a leader who was that motivated to let us know how special and important we are to him. Well, years later, the time had come for me to pull this Chinese Proverb out of my bag of tricks.

I hired a photographer, Anne, to document this event. We met twice before the event to plan and practice the strategy. I wanted to have a photostory to publish online after the event. I mapped out the journey I planned for the attendees, and indicated to Anne which moments were important to capture for the story.

Upon entering the event, attendees were greeted by a table which held a pile of hand-made envelopes. I purchased a role of brown paperbag style paper and crafted each envelope myself. Given the proverb was about a red thread, I thought it was most appropriate to include in each guest’s invitation.

We are grateful to host this event with General Assembly at 1776. Join us as we work in groups on our side projects, full time projects, or find a project to add value to. You deserve to be in a supportive and creative environment surrounded by inspiring people who want to see you grow. We are here to help you create that for yourself.

This event was awesome.

Continuing to pick up momentum, I met with a few of the regulars to map out the strategy to install the ecosystem methodology into D.C.

Later that evening, I had a meeting scheduled with one of the workshop attendees at General Assembly.

The next day, I hit a roadblock.